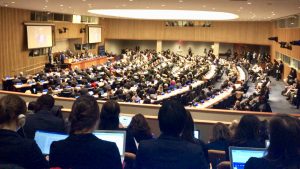 It would have been overly serendipitous if the Sixteenth Assembly of States Parties of the ICC (ASP) had agreed to amend the Rome Statute to criminalise the use of Anti-Personnel Landmines (landmines) in the Session that fell on the twentieth Anniversary of the Ottawa ‘Mine-ban’ Treaty. As it transpired, a number of States Party to the Ottawa Treaty refused to support the ‘Belgian Amendment’ to Article 8 of the Rome Statute to the extent that it criminalised the use of landmines. In response to opposition from these states the Belgian led group of sponsoring states dropped this aspect of the draft amendment. Ultimately the ASP adopted an amendment that expressly criminalises the use of biological and toxin weapons, the use of weapons causing injuries by fragments which in the human body escape detection by X-rays and the use of laser weapons causing permanent blindness. We welcome the adoption of an Amendment that criminalises the use of a number of weapons which are either indiscriminate by nature and/or cause superfluous injury and unnecessary suffering, and we call on States Parties to ratify it. However, we are bitterly disappointed that States Party failed to take the logical step of criminalising the use of landmines too.

We are appalled that the United Kingdom, France, Germany, Japan, and Australia, amongst others decided to join South Korea in blocking the landmine aspect of the amendment. The legal excuses (or ‘concerns’) given by these states for opposing the criminalisation of the use of landmines are without merit, and their refusal to take a strong stance in ending the horror that landmines cause to children, men and women is particularly shocking.

Amnesty International did not hear any persuasive reason why these States Parties would not support efforts for the ICC to prosecute the use of landmines as a specific war crime. Considering the extent to which landmines are used in the Korean peninsula, and especially by the Republic of Korea itself, the Republic of Korea’s opposition to the landmines element was always going to be strident, but it left the Assembly in the absurd position where a State Party that routinely uses the weapons the Assembly was trying to criminalise was able to eventually block the proposed Amendment.

With this in mind, all States Parties, and especially those that are party to the Ottawa treaty, should have positively championed the Belgian initiative and urged the Republic of Korea to join the widespread consensus to adopt the full amendment. The position that a few states took was that the ‘concerns’ they had regarding the criminalisation of the use of landmines had not be resolved since 2009, when the Amendment was first tabled. Indeed the ‘concerns’ raised by States seemed to evolve as they were rebutted by sound legal argument. For example, earlier discussions had considered whether the evolving customary international law prohibition of the use of landmines could be reflected in the criminalisation of their use. When it was pointed out that in some instances the Rome Statute goes beyond customary international law, and in others it does not go far enough, this argument was dropped.

Ultimately, States Parties fell back on ‘procedural concerns’ regarding amending the Statute, arguing that amendments should only go forward on the consensus of all members of the Working Group on Amendments. There is a notable circularity in some States Parties’ reasoning that they cannot join a consensus until there is a consensus, but our gravest concern is that the only state that purported to oppose the amendments on the merits continues to use landmines and thus has an interest in preventing their criminalisation. Some states made other procedural arguments against the criminalisation of the use of landmines, including that, ‘we shouldn’t amend the Statute whenever we want to criminalise a particular weapon’s use’ but these were speedily dropped once landmines were removed from the amendment. Ultimately the only conclusion to be made is that the States Parties who refused to join the growing consensus did so for diplomatic reasons or reasons of self-interest.

While the use of landmines may constitute other crimes under the Rome Statute, the failure to expressly criminalise their use may allow perpetrators of these vicious attacks legal wriggle room to escape accountability. This could leave the victims of the horrific harms that anti-personnel mines cause – countless women, men and children have died or been injured – without recourse through the Rome Statute system. This is why we believe that the Rome Statute should expressly recognise the harms caused by landmines and ensure that perpetrators can be charged accordingly.

Amnesty International commends all those States Parties who, alongside Belgium, had co-sponsored the full Amendment to Article 8. We will continue to urge the Assembly to adopt the Amendment to Article 8 criminalising the use landmines and we will in 2018 continue to call on those very few States Parties who prevented it to reconsider their positions.

Other developments at the ASP

In relation to other developments at the 16th ASP session, the Assembly decided to allocate a budget of €147,431,500 to the Court for 2018. Once again, however, strongly vocalised support for the ICC from the Court’s largest funders did not correspond with the ‘zero-growth’ squeeze they continue to put on the Court to find saving at all costs.

Amnesty International remains deeply concerned that some States Parties – ‘the G-7’ – Canada, Colombia, Ecuador, France, Germany, Italy, Japan, Poland, Spain and the United Kingdom, continue to insist on a zero-growth position in relation to the Court’s budget. This political position couched in terms of ‘efficiency’ will deeply affect the Court’s ability to meet the demands placed upon it.

In reality, the budgetary pressure of certain States Parties will impact on the ability of the Prosecutor to independently open investigations and force the Court to discriminate between different groups of victims and situations as it opens ever more challenging preliminary examinations and investigations.

The continual ‘zero-growth’ pressure on the Court was also reflected in the Assembly’s decision not to replenish the ICC’s contingency fund to the level of €7 million. Amnesty International had recommended that States replenish the Contingency Fund at this Assembly session, so that the Court could meet the currently unforeseen costs of opening investigations in Burundi and Afghanistan. The opening of these investigations will require the Court to make substantial budget requests from the contingency fund if the Office of the Prosecutor is to investigate effectively and if the Registry is to provide for meaningful outreach and victims’ participation in these situations next year. The Assembly’s regrettable decision deprives the Court of the ability to access the full amount of funding for resources it may need in 2018.

Amnesty International is concerned that the decision taken by States Parties regarding the contingency fund sent a political message to the Court that its future activities must be kept in check. This was echoed in discussions concerning the Court’s ongoing legal aid policy review, where the zero growth States Parties had insisted, even before the review had been finalised, that it should lead to recommendations which would be ‘within existing resources’ currently allocated to legal aid. This particularly damaging request to the Court was watered-down in the final ‘omnibus resolution’ adopted. However, the message to the Court was clear: keep expenses down at all cost – even those necessary for fair trials and an effective victims’ representation, a crucial aspect of the right to fair trial.

Amnesty International will continue to oppose – in the strongest terms – the budgetary pressure placed on the Court. It should be noted though that the Court has also acquiesced in the ‘Zero Growth States’’ unacceptable budgetary stance through not asking for what it really needs. We are deeply concerned that the Court has taken the route of working within unacceptable budgetary constraints instead of vociferously demanding the non-negotiable resource requirements for independent Prosecutorial activity and the Court’s activities.

We are concerned by an apparent closing of space for NGOs at this session of the ASP. NGOs not being able to deliver their allocated remarks and the closing of large parts of the Assembly’s discussions and rooms was an unfortunate and regular occurrence at the Assembly session, and this issue must be urgently addressed by States and the ASP Secretariat. Despite these challenges, the participation of civil society in numerous side-events and in some plenary sessions served to highlight to States Parties why the Court is more needed than ever, and in whose interests the Court and States Parties must continue to act. For the sake of completeness, we had planned to provide the following statement during the final session:

‘The prospect of accountability for crimes under international law is now a reality. This has been the greatest success of the Rome Statute’s first 20 years. As the Court begins to extend its shadow over perpetrators from powerful States, this will bring greater challenges, including threats to those working to ensure that the Rome Statute’s aims are realised.
We continue to urge the Assembly to meet those challenges and to protect all Human Rights Defenders and – of particular relevance to this Assembly – those working on the Rome Statute system.
The space for NGOs and civil society, within this Assembly and on the ground, must be fiercely protected by all States Parties and we urge you to undertake all efforts to support the work of civil society. This must include the protection of those at risk for their work: to hold the most powerful to account and ensure truly universal justice for victims.’

Election of Judges and Activation of the Crime of Aggression

Six new judges were elected by the ASP to the bench of the ICC; and the ASP agreed to activate the Crime of Aggression from July 17, 2018.

Amnesty International hosted a reception during the Assembly of States Parties to launch its project which seeks to redouble the organisation’s efforts to promote strong human rights compliance by international justice mechanisms, including the ICC. This project will see the organisation focus its work towards one the most serious challenges to the enforcement and protection of the rights of the accused, victims and witnesses within international justice mechanisms.