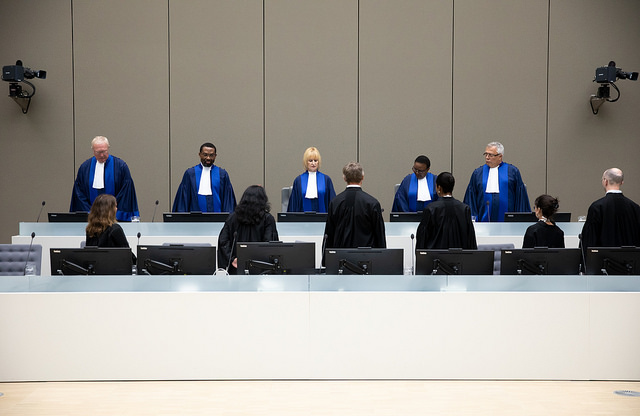 Nadia Volkova, Director of the Ukrainian Legal Advisory Group highlights that, with very little hope of domestic justice, the Office of the Prosecutor’s continuing delay in seeking authorisation to commence an investigation in Ukraine is undermining confidence that the ICC will deliver international justice.

Ukraine had been subject to the preliminary examination by the Office of the Prosecutor (OTP) for more than 6 years prior to its conclusion at the end of last year.  At that point, on 11 December 2020, then-Prosecutor of the International Criminal Court Fatou Bensouda announced that the statutory criteria for opening an investigation into the situation in Ukraine had been met.

However, in her statement Prosecutor Bensouda did not announce that her Office would take the next step of requesting authorisation from the ICC Judges of the Pre-Trial Chamber to open the investigation. Instead, noting that several other preliminary examinations have reached or are approaching the same stage and citing operational challenges relating to the pandemic, as well as limitations of her Office’s operational capacity “due to thin and overextended resources,” the Prosecutor stated:

Against this backdrop, in the immediate period ahead, we will need to take several strategic and operational decisions on the prioritisation of the Office’s workload, which also duly take into account the legitimate expectations of victims and affected communities as well as other stakeholders. This is a matter that I will also discuss with the incoming Prosecutor, once elected, as part of the transition discussions I intend to have. In the interim, my Office will continue to take the necessary measures to ensure the integrity of future investigations in relation to the situation in Ukraine.

This decision was confusing to many: victims, civil society, and domestic authorities – particularly in light of the fact that the OTP had previously acknowledged that the situation of lack of resources could cause problems for potential investigations. In its Strategic Plan 2019-2021, the OTP stated:

It is important to stress that once the Office reaches a finding that the conditions of article 53(1) are met, the Rome Statute requires the Prosecutor to open an investigation. At the same time, if multiple situations would reach this threshold at the same time, then it is, resource-wise, impossible to properly respond.

This situation of ‘limbo,’ in which no investigation of the situation has been requested despite having met the statutory criteria, has so far remained unresolved whilst victims and their representatives wait for a decision by the new Prosecutor, Karim Asad Ahmad Khan. At the same time, the question begging to be asked is: why did the OTP find itself in this situation – which it had clearly foreseen – and what has it been doing since 2019 to prepare accordingly? The hope is that the decision to request authorisation to investigate from the Pre-Trial Chamber will be made sooner rather than later. Victims in Nigeria are in a very similar situation.

Little Hope for Victims to Obtain Justice at the Domestic Level

Although cooperation between Ukrainian authorities and the OTP during the preliminary examination was effective, the Ukrainian domestic legal system is unable to adhere to the principle of complementarity and ensure effective investigations and prosecutions of war crimes and crimes against humanity that have allegedly been committed during armed conflict in Ukraine. This means that while the process at the ICC is stalled, there is hardly any expectation that victims could see progress at the domestic level.

To the contrary, while the OTP conducted its preliminary examination it motivated Ukrainian authorities to attempt to implement international humanitarian and international criminal law, to consolidate the investigations and put prosecutorial strategies in place, and to train law enforcement authorities in investigating, prosecuting and adjudicating war crimes and crimes against humanity.

Without the “catalytic effect” of the ICC investigation there is a risk that international justice will be further deprioritized at the domestic level as well. The little results that have been achieved so far will dissipate and the momentum to build on these results will also be lost. There are still major problems, including with correct classifications of alleged crimes (e.g., terrorism versus war crimes). Many procedural standards are not in place. For example, there is no law on witness and victim protection, no law regulating preservation of evidence and no law on guaranteeing the right to fair trial for the accused, An 18-month statute of limitation for investigations has also been imposed. Safety and security risks for all the participants in these justice processes remain very high. This is on top of the general lack of conceptual understanding among the investigators, prosecutors and judges of the fundamental differences in approach to prosecuting grave international crimes and ordinary crimes.

Hopes for Justice Rest on the ICC Proceeding with its Investigation

The longer the new Prosecutor takes to start the investigation, the greater the chances are that the vital evidence will be lost or tampered with, the perpetrators will be killed, flee or go into hiding, and the witnesses will become unavailable – in which case, the justice project as it pertains to the situation in Ukraine will fail.

Cumulatively, the current situation is indicative of the fact that there is very little hope for the victims to obtain justice at the domestic level. There is also very little trust in domestic institutions to ensure justice for the crimes that victims and their loved ones suffered. The ICC and other international legal avenues are where they place their hope and trust. Consequently, if these institutions fail them too, their belief in justice will evaporate altogether.

This post is part of a full series of opinion pieces by civil society organisations on ‘the cost of hibernated ICC investigations’ hosted by Amnesty International’s Centre for International Justice and the World Federalist Movement/Institute for Global Policy.