This year’s Assembly of States Parties session took place following renewed attacks on the Court by the USA, and ‘threats to the Court’ were high on the agenda. However, it appears that the biggest threat to the Court’s effectiveness comes from within the Assembly itself, cloaked in the language of budget and bureaucracy.

There comes a point when states’ rhetorical commitments towards ending impunity comes up against the costs of international justice. This December we saw that states are not matching their rhetoric with action. States parties who publicly extol their efforts for victims, must recognize that the rights of victims are affected by decisions made in the Assembly. Unfortunately, while the importance of ensuring ‘justice for victims’ is loudly trumpeted by a number of states parties – including the main funders of the Court – there is a conspicuous disconnect between the positions of these states in side-events or on Twitter and their decisions within the Assembly.

Victims can only access justice – and ultimately reparations – at the ICC if the Court has the resources to fulfil its mandate. If the OTP does not have resources to undertake investigations and prosecutions, it will not be able to bring cases to the Court in which victims can participate. If the registry is not properly resourced, trial processes take longer and justice for victims is delayed. If adequate legal aid resources are not made available to victims, they cannot be meaningfully and effectively represented at the Court. States parties openly push the Court to do more for victims while failing to mention that they expect this to be done with less.

The Court must take a measure of responsibility for its current budgetary situation. The Court has failed to request enough funds to fully fund its work and the latest 2.4% request was already insufficient before it was cut by states parties. As we said in May, the Court had the opportunity to set the agenda for the year’s budgetary discussions in the springtime, but having requested such a meek budget, it was always going to find itself under resourced.

We will continue to demand more of the Court

Despite apparent efforts to dampen the Court’s ability to undertake its work, we will continue call on the Court to undertake investigations in situations where states parties have shown themselves unwilling or unable to meet their obligations to investigate and prosecute Rome Statute crimes.

In this vein, at this year’s ASP session, Amnesty International launched its new report ‘Willingly Unable: ICC Preliminary Examination and Nigeria’s Failure to Address Impunity for International Crimes’. The report assesses the ICC OTP’s eight-year long preliminary examination into alleged crimes committed in the context of the conflict in northeast Nigeria and highlights that the Nigerian government has no intention to undertake genuine investigations but rather has pursued ‘sham’ criminal proceedings to ‘shield’ perpetrators from an ICC investigation and to give a ‘veneer’ of accountability in Nigeria. In finding that the Nigerian government is unwilling and unable to meet its obligations to investigate and prosecute both Boko Haram and the Nigerian military, the report concludes that the Office of the Prosecutor should open a full investigation into the atrocities that have been committed in northeast Nigeria. 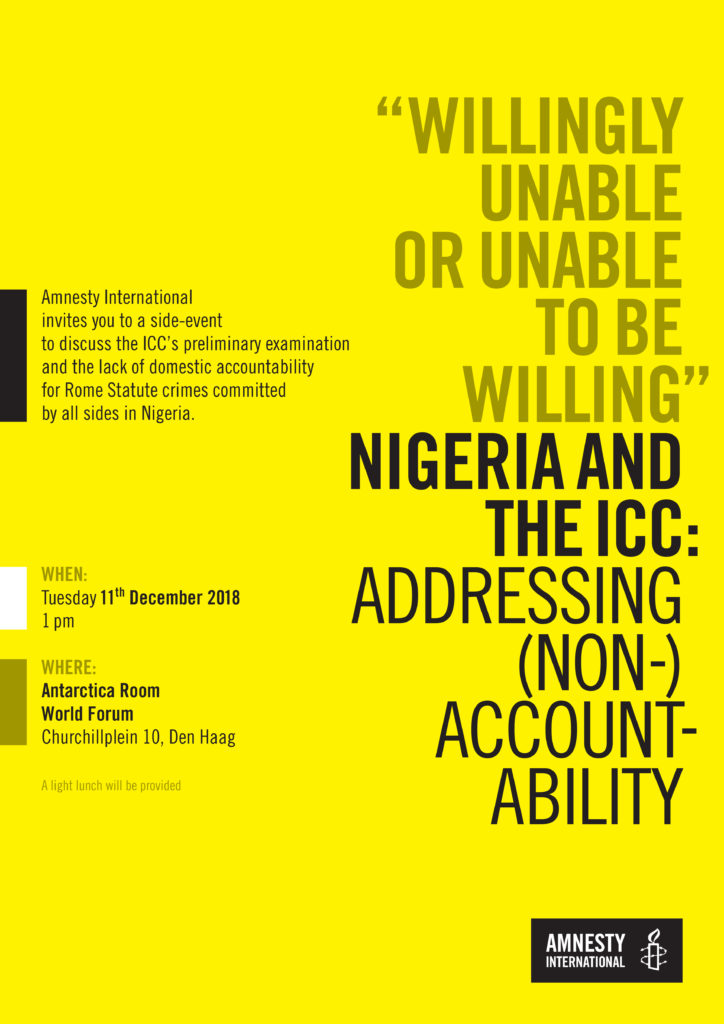