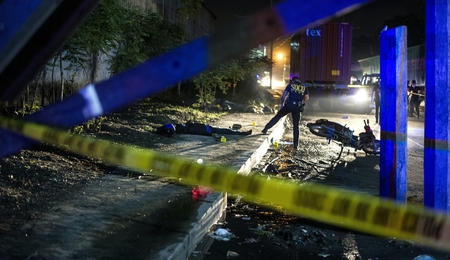 Representatives of civil society from the Philippines following the ICC’s process describe their trepidation that, despite the recent decision by the ICC Office of the Prosecutor to request authorisation to investigate crimes committed in the context of the ‘war on drugs’, the investigation could ultimately be hibernated.

The mother of a 23-year-old who was killed in 2017 in the Philippines said: “I am happy because I realized that justice never sleeps.” This was after getting information that International Criminal Court (ICC) Prosecutor Fatou Bensouda has requested authorisation from the Pre-Trial Chamber of the ICC to proceed with an investigation of the Philippine situation. Prosecutor Bensouda fulfilled her promise to complete, as much as she could, the pending preliminary examinations before her term ended amidst daunting challenges of limited resources, the pandemic, and limited States Parties’ support.

Impunity in the ‘War on Drugs’

We, as Filipino civil society leaders, welcome the ICC Prosecutor’s decision to seek permission to investigate as a ray of hope for accountability in the bloody war on drugs by the Duterte government. Justice has been sleeping on the cries for accountability within the Philippines. There is a weak response by the supposed pillars of the justice system in the country to the tens of thousands of families of victims of extrajudicial killings, almost one third of which occurred during anti-drug police operations.

Police investigations have been scarce, slow or terminated simply on allegations by law enforcement personnel that they acted in “self-defence” following violent resistance and drawing of weapons by those killed. The “presumption of regularity” applied by the authorities means that official actions of government officials are presumed to have been performed properly unless the contrary is proven by competent and proper evidence. But deaths are not supposed to occur during police operations and must be investigated promptly, thoroughly, effectively, impartially and independently.

Families of victims or their lawyers have been given the run-around when they request investigators’ reports. Many relatives of victims have left their communities for fear of retaliation by the perpetrators. Out of the thousands of cases of extrajudicial killings, only one case has led to a successful prosecution and conviction.

Some families of victims killed in the war on drugs had to go to the Philippine Supreme Court (SC) to seek remedies, filing two separate petitions  praying for protection and for the war on drugs to be declared unconstitutional. It has been four years since these cases were filed, but the legality of the war on drugs remains unresolved. Meanwhile, the Supreme Court (SC) issued a writ of amparo, a protection order for a community affected by numerous killings  and ordered the Office of the Solicitor General (OSG) to provide the lawyers of the victims in the consolidated cases with police documents related to the killings in the war on drugs.  After long delays, the police provided 289 compact discs (CDs/DVDs) that contained documents supposedly on 20,322 drug-related deaths, but the victims’ lawyers state that the case files were “irrelevant, and in fact, absolutely rubbish insofar as the instant cases are concerned.” There has been no further actions by the Supreme Court on the matter.

Efforts for the UN Human Rights Council to conduct a full inquiry into the bloody war on drugs were thwarted in favour of providing technical assistance following a promise of the Philippines Department of Justice to create a review panel for the cases of killings. This, despite findings of the Office of the High Commissioner for Human Rights that a “pattern suggests planting of evidence by police officers and casts doubt on the self-defence narrative, implying that the victims were likely unarmed when killed.”

One year hence, no significant progress for criminal prosecution of those most responsible for  killings is evident. In February 2021, the Secretary of Justice gave a statement to the Human Rights Council reporting that the review panel had commenced its initial work and had identified cases where “law enforcement agents involved failed to follow standard protocols pertaining to coordination with other agencies and processing of the crime scene.” The Department of Justice is now sitting on recommendations of the Internal Affairs Service for criminal and administrative actions on a few cases related to the war on drugs, while it awaits police action which most likely will never come.

The killings have been encouraged, if not ordered, by the highest officials of the country; and they continue amidst the pandemic. It is obvious that the justice system in the Philippines is sleeping with few erratic bursts of lethargic awakening. Impunity shrouds the Philippines situation.

A Ray of Hope for Justice Amidst Feared Delays

Impunity for heinous crimes committed in the Philippines must be broken by the ICC in the soonest possible time frame. However, the ICC’s task will not be easy. Philippines President Rodrigo Duterte unilaterally withdrew the Philippines from the Rome Statute effective 17 March 2019, which means that any cooperation from the government is unlikely. He even threatened to arrest ICC investigators and other personnel when they are in our country.

Nonetheless, it is the role of the ICC to step in to end impunity when national authorities fail or refuse to do so. The ICC is a court of last resort which serves many countries of the world.

While observing the ICC Review Mechanism, we noted  prolonged preliminary examinations as well as delays in investigations by the ICC in other country situations due to  limitations of resources as well as non-cooperation or political interference by states. We understand, the preliminary examination of the Philippine situation was affected by the pandemic, severe limitations of the ICC’s resources and the Office of the Prosecutor’s heavy work load.

The ray of hope brought by Prosecutor Bensouda’s decision to seek authorization to commence an investigation is currently accompanied by trepidation and sleepless nights as we await the Pre-Trial Chamber’s decision. An ICC investigation of possible crimes against humanity in the Philippines would be a significant step towards justice. Yet, we note with extreme concern the Independent Experts’ recent recommendation that the Office of the Prosecutor should hibernate investigations when resources are inadequate, as this might be applied to the situation in the Philippines.

The killing spree continues in our country amidst the pandemic. Those recently killed with impunity are not only those allegedly involved with drugs but lawyers and human rights defenders. Now, many victims of serious crimes violating international law only hope for justice through the ICC.

Hibernation and prolonged ICC processes may pose risks to victims and witnesses, encourage the destruction or disappearance of evidence and undermine the ability of the Court to conduct effective investigations towards the delivery of justice. We hope the transition of the new Prosecutor and the many challenges faced by the Court will not serve as obstacles to progress in the Philippine situation and elsewhere.

Failures to pursue accountability on the part of domestic and international institutions, including the United Nations and the ICC, may cement the Filipino people’s mistrust in justice institutions and the rule of law. And this may add injury to the already suffering families of victims of serious crimes, instead of helping heal their wounds.

Domestic and international justice systems must work together, but when countries fail their citizens, the role of the ICC comes to greater significance to prevent more egregious crimes from clouding our lives with darkness.

We hope the ongoing ICC Review mechanism will help resolve issues for more effective examinations, investigations, prosecution, convictions and reparations. Efforts to strengthen the performance of the Court to more efficiently and effectively deliver justice in many parts of the world must be supported by immediate, significant actions from the ICC’s Assembly of States Parties to provide the Court with appropriate resources matched with the many situations needing its response to combat impunity. The Assembly’s political support, especially when there is an attack on the ICC and non-cooperation of states, is also highly needed.

For about a decade, police and other unidentified perpetrators of killings have been promised and assured a cloak of safety that they can kill without accountability by high government officials in the Philippines. Unfettered impunity must not continue. Justice must not sleep nor be hibernated, while the victims of egregious crimes and their families continue to suffer. The promise of the ICC, as a court of last resort, must be fulfilled, not only to deliver justice but also to prevent further deaths and serve as a deterrent to serious violations of international law.

We hope that despite the many challenges, the ICC and the ASP will be able to find solutions to obstacles for justice and show the Filipino peoples and the world that international justice is definitely possible at the Court of last resort when their countries fail them. We hope the ICC and the Assembly will not fail the mothers and those whose lives were shattered by egregious crimes to experience that indeed “justice never sleeps.”