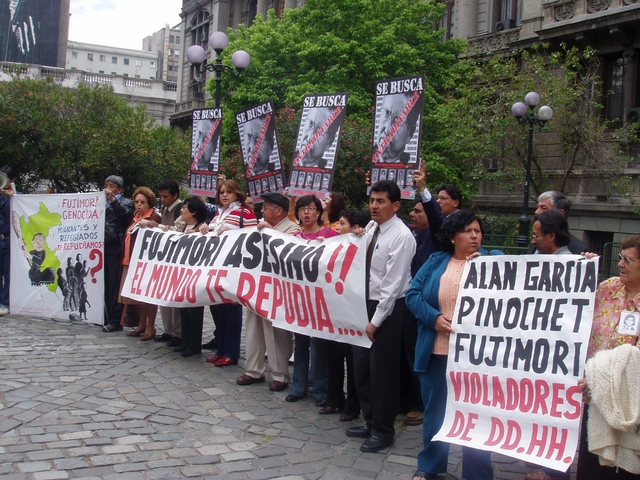 The Peruvian state has yet to present evidence to show that the conditions necessary to justify the early release of former president Alberto Fujimori have been fulfilled, Amnesty International said today, following the submission of an amicus curiae brief to the Inter-American Court of Human Rights expressing concern at the pardon granted.

“The pardon granted to Alberto Fujimori has been a serious blow to human rights in the region, and in particular to the victims and their families. The demand that the Peruvian state fulfil its international human rights obligations comprehensively is absolutely imperative”, said Erika Guevara Rosas, Americas Director at Amnesty International.

“Early release, even for humanitarian reasons, should under no circumstances result in a conviction being quashed nor constitute a measure that perpetuates impunity”.

Amnesty International will observe the public hearing of the Inter-American Court on 2 February to monitor that the Court’s judgments in the Barrios Altos and La Cantuta cases are complied with and, in particular, the order issued at the time regarding reparation and relating to the duty to investigate, prosecute and, where appropriate, punish all those responsible for violations committed in these cases.

Inter-American Court orders have a binding nature and, in addition, Peru is a state party to the Vienna Convention on the Law of Treaties which states that “A party may not invoke the provisions of its internal law as justification for its failure to perform a treaty” (art.27).

In 2001 the Inter-American Court of Human Rights issued a judgement in case of Barrios Altos vs Peru regarding state responsibility for the killing of 15 people and the wounding of another four by members of the Colina paramilitary group, as well as for the failure to investigate and bring to justice those responsible for these crimes.

In 2006, the Court issued a judgement in the case of La Cantuta vs Peru regarding state responsibility for the forced disappearance and extrajudicial execution of ten people including a professor at the National Enrique Guzmán and Valle-La Cantuta University by members of the Colina paramilitary group, as well as for the failure to investigate and punish those responsible for these crimes.

In both cases the Court is still continuing to “monitor compliance with its judgement”.

In 2009, the Peruvian Supreme Court of Justice’s Special Criminal Court found former president Alberto Fujimori guilty of the killings, abductions and injuries inflicted by his subordinates on dozens of people while he was head of state. The Court also found that these crimes constituted crimes against humanity and sentenced him to 25 years’ imprisonment. This judgment was upheld several months later by the Supreme Court.

On 24 December 2017, President Pedro Pablo Kuczynski, issued Supreme Decree No. 281-2017-JUS, granting “a pardon and the right to grace on humanitarian grounds” to former president Alberto Fujimori “with respect to current convictions and criminal proceedings”.

The press release was first published here; the amicus curiae brief can be downloaded from the link below.