In this first guest opinion piece, Michael Adams and Liz Evenson discuss the key findings of Human Rights Watch’s recent report: Who Will Stand for Us? Victims’ Legal Representation at the ICC in the Ongwen Case and Beyond. 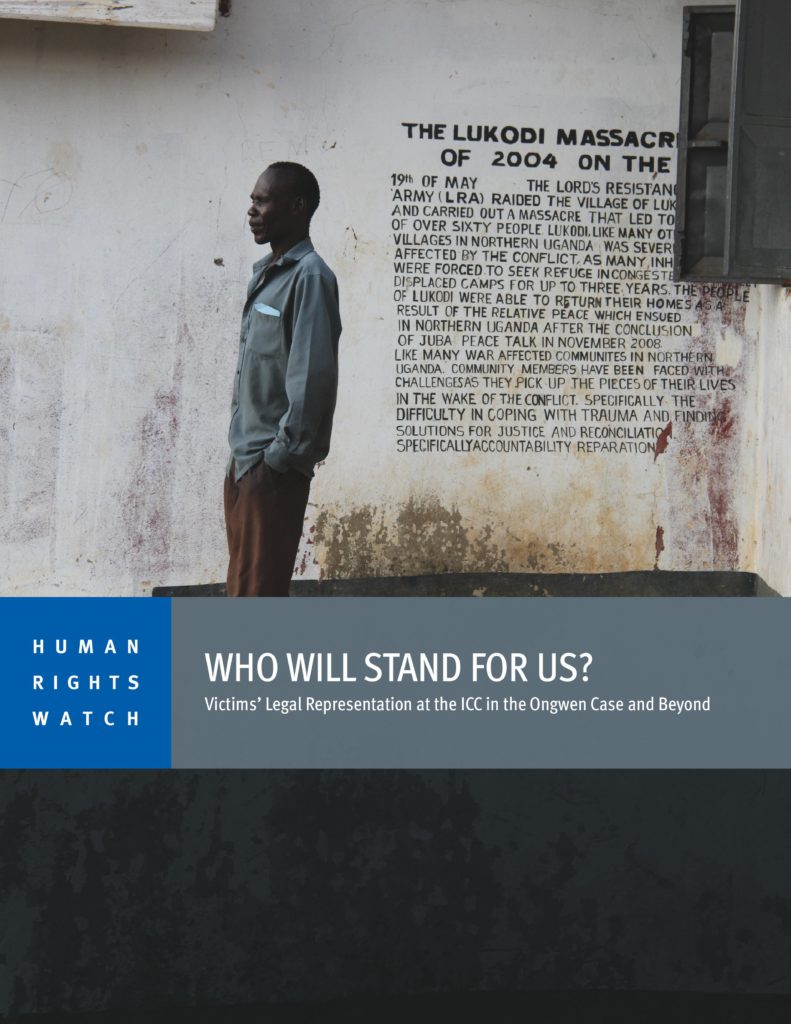 At the International Criminal Court (ICC), victims can participate in court proceedings, usually through their lawyers. This gives victims a voice in the courtroom and creates a vital link between the ICC and affected communities. But a November 2015 decision in the Court’s case against Dominic Ongwen, a Ugandan former commander of the Lord’s Resistance Army, put into the spotlight just how decisions are made about which lawyers will represent which victims, who gets to make the decision, and how the costs of representation will be paid.

The ICC’s Rule of Procedure and Evidence 90 protects victims’ right to choose counsel. But it also allows judges to ask the Court’s Registry to help victims choose a common legal representative. If victims are unable to choose, the Registry is allowed to appoint counsel for victims. ICC regulations give the Court’s judges power to appoint the victims’ legal representatives too.

In the Ongwen case, some victims appointed a team of lawyers to represent them, after community leaders became concerned as proceedings neared that their voices would be neglected. When the single Judge on the Pre-Trial Chamber decided it was necessary to appoint a common legal representative in the case—that is, a lawyer or team of lawyers to represent a group of victims—he did not appoint the lawyers that some victims had already selected, however. Instead, he appointed the head of the ICC’s Office of Public Counsel for Victims (OPCV) – an independent office at the Court responsible for providing legal assistance to victims and their lawyers and representing victims in court, if appointed by the judges.

The other lawyers were permitted to continue representing victims who appointed them. But because of the Judge’s interpretation of a Court Rule about payment for legal aid, the external team of lawyers initially were not able to get payment for their services through the Court. Eventually the Court’s Registry decided to financially support the team, but for nearly a year, it put some victims in the difficult position of either staying with their preferred lawyers, running the risk that counsel would not be able to continue for lack of funding, or switching to the remunerated Court-appointed legal team.

What happened in Ongwen may seem unique. But as Human Rights Watch documented in a new report, it reflects a trend at the ICC to take over decision-making about who will stand for victims, as opposed to supporting victim participants to organize legal representation.
Our research suggests that this trend is a cause for concern and that the Court needs to take a fresh approach to policy and practice for victims’ legal representation to prevent a further drift away from ensuring victims’ views and concerns are given the priority they deserve when it comes to decisions about their legal representation.

Under what the Registry calls a “systematic approach,” used by the Court in a majority of cases since 2011, the tendency has been to organize common legal representation early in the legal proceedings, sometimes before victims have been accepted to participate in a case. There have been transparent and competitive selection processes to identify counsel, but consultation with victims has been limited to the general qualities they want in a lawyer. The ultimate decision about counsel is taken by the judges.

The systematic approach was not actually used in Ongwen. In a positive development, the Pre-Trial Chamber allowed victims to choose their own legal representatives. Later, however, the Chamber disqualified these lawyers from being the common legal representative because they had not been selected by the Registry under a “transparent and competitive selection procedure.” It proceeded to appoint the OPCV based on information collected by the Registry about victims’ general preferences, as well as cost implications, apparently applying concepts borrowed from the systematic approach.

To be sure, aspects of the systematic approach show a deep concern for preserving the interests of victims and ensuring effective representation, as well as the efficiency of Court proceedings. But there have been two problems with its use. First, it has been used by default rather than as the Court’s rules appear to intend—that is, as a measure of last resort when victims themselves cannot agree on their choice of counsel.

Second, its use has become increasingly concerned with limiting the cost of victims’ legal representation, coinciding with a clampdown by ICC member countries on the budget. In the Ongwen case, it seems the Court was left ill-equipped to respond to a situation in which a community was actively making decisions about what kind of legal representation they wanted. Short time-lines after the Prosecutor added charges to the Ongwen case also meant that victims in other communities had very little opportunity to engage with these issues.

These trends are a problem. Choice matters, and not only because the Court’s rules call for it. It matters because it helps victims to develop a sense of trust that their counsel will represent their views. And while choice is by no means the only or even the most important aspect of effective representation, the ICC needs to take every opportunity it can get to deepen its local impact and legitimacy. Efficiency in the length and cost of trials is also important, but sounder policy in this area could help the Court to balance these various goals better.

Other ICC observers have come to similar conclusions about the need for new approaches to support victims’ choices. Our report recommends that Rule 90 always be used and that the Court’s judges and its Registry work together to develop a policy framework with a step-by-step approach for applying Rule 90. It should make clear, based on information about what is happening on the ground, when there is a need to move away from victims’ individual choice of counsel—in Rule 90(1)—to assisting victims to choose a common legal representative —Rule 90(2)—to, as a last resort, choosing for victims, Rule 90(3).

It is an ideal time for the ICC to put new policies in place. Its judges have been working to improve the efficiency of proceedings, and the Registry’s new field office structure offers the opportunity to gather as much information as possible, as early as possible. This could include information about the preparedness of victims to make decisions about their legal representation due to their level of organization and familiarity with the court; their desire to choose a lawyer instead of being appointed one; and the particular logistical and other contextual considerations that will have to be overcome in order to assist victims to choose. The Court is also carrying out an ongoing review of the legal aid system.

Without adequate funding to deepen engagement on the ground and in the legal aid budget, though, a new policy framework will become as resource driven as the systematic approach, re-creating the problem we seek to solve. It is equally important for ICC member countries to support the ICC by providing the resources necessary for success.