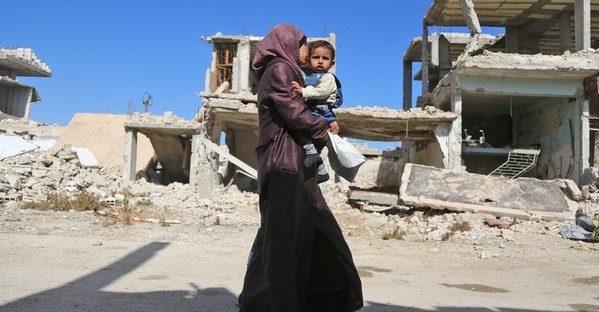 The United Nations General Assembly created the “International, Impartial and Independent Mechanism” (IIIM) in an unprecedented resolution in 2016 in response to the deadlock at the United Nations Security Council, where Russia has used its veto 12 times since 2011 to block Council action on the Syrian conflict. Moscow’s latest veto came just last week in the wake of a horrific attack in Douma that claimed the lives of dozens to once again prevent the establishment of an attribution mechanism on the use of chemical weapons in Syria.

The UN Security Council has failed Syrians. In seven years of conflict, close to half a million people have been killed and 11 million have been forced to leave their homes. The Syrian government has launched numerous chemical weapons attacks on civilians in areas held by anti-government groups. It has also conducted deliberate and indiscriminate attacks against civilians, withheld humanitarian aid, employed starvation as a war tactic, and arbitrarily detained Syrians in contravention of international law. The Syrian government’s practices of torture and ill-treatment in detention and enforced disappearances continue. Non-state armed groups have also committed a host of abuses, including launching deliberate and indiscriminate attacks against civilians, abducting and arbitrarily detaining activists, and interfering with humanitarian aid delivery. ISIS has repeatedly used chemical weapons and has used civilians as human shields and employed landmines and other IEDs causing significant harm to civilians. Yet, the Security Council has failed to take decisive action to comprehensively address the situation.

Efforts to stop these atrocities and hold those responsible to account have been blocked repeatedly by Russia, which continues to misuse its veto power in the Security Council. By creating the IIIM, the General Assembly demonstrated that it can take the reins in the face of Security Council deadlock to address the longstanding state of impunity for these abuses on all sides to the conflict. It is crucial that the Assembly continue to take meaningful action to address the countless human rights abuses and humanitarian catastrophe in Syria. The countries that voted for the resolution to establish the mechanism in December 2016 took a critically important stand for Syrian victims.

But passing the resolution was just the first step. The mechanism faces a demanding task ahead to process the considerable information that exists about ongoing abuses in Syria, develop strong cases, build bridges with victims, as well as collaborate with other documentation groups and national judicial authorities investigating crimes in Syria, with whom the IIIM’s files are to be shared.

First, it will need to raise the necessary funds to carry out its important mandate of gathering, preserving, and analyzing potential evidence for future prosecutions. We urge UN member states to make a financial contribution to ensure it has the vital resources it needs to do its work. At the same time, its current reliance on voluntary contributions makes it difficult for the IIIM to plan and organize its work to maximize long-term efficiency. Member states should therefore reiterate their support to move the IIIM’s funding to the regular UN budget as soon as possible.

Second, the cooperation of states, the UN system, as well as civil society, including through access to documentation and material, will be crucial to assist the mechanism in its work. In a welcome step, 28 Syrian civil society groups have recently concluded a cooperation protocol with the mechanism on April 3. The protocol is a positive sign of future engagement between Syrian groups and the IIIM, including on the support and protection of victims and witnesses.

Member states should similarly pledge their commitment to cooperate with the IIIM as necessary, including by sharing relevant information about crimes committed in Syria, ensuring their laws allow their justice systems to use the evidence obtained by the IIIM, and, where relevant, providing necessary resources to war crimes units to enhance their capacity to investigate crimes perpetrated in Syria. In the midst of an increasingly difficult terrain, we believe it is all the more vital that UN member states make every effort to contribute to the mechanism’s future work, as the only UN-mandated body to ensure criminal accountability for abuses in Syria.

Overall, the mechanism, along with other documentation efforts, will be critical to future domestic and international accountability processes. Governments that supported the establishment of the IIIM should remain committed to seeking justice for victims in Syria, whether in General Assembly or through other avenues including the use of universal jurisdiction. Indeed, impartial and comprehensive justice for the serious crimes committed in Syria is an essential component of any successful political transition in the future and cannot—and should not—be bargained away in peace talks.

Several countries, including Sweden, Germany, and France, are already investigating some individuals alleged to have committed serious crimes in Syria. The IIIM can contribute to these and other efforts. Its work should help ensure that justice and accountability for the mass atrocities committed in Syria over the past seven years are not swept away by a veto.